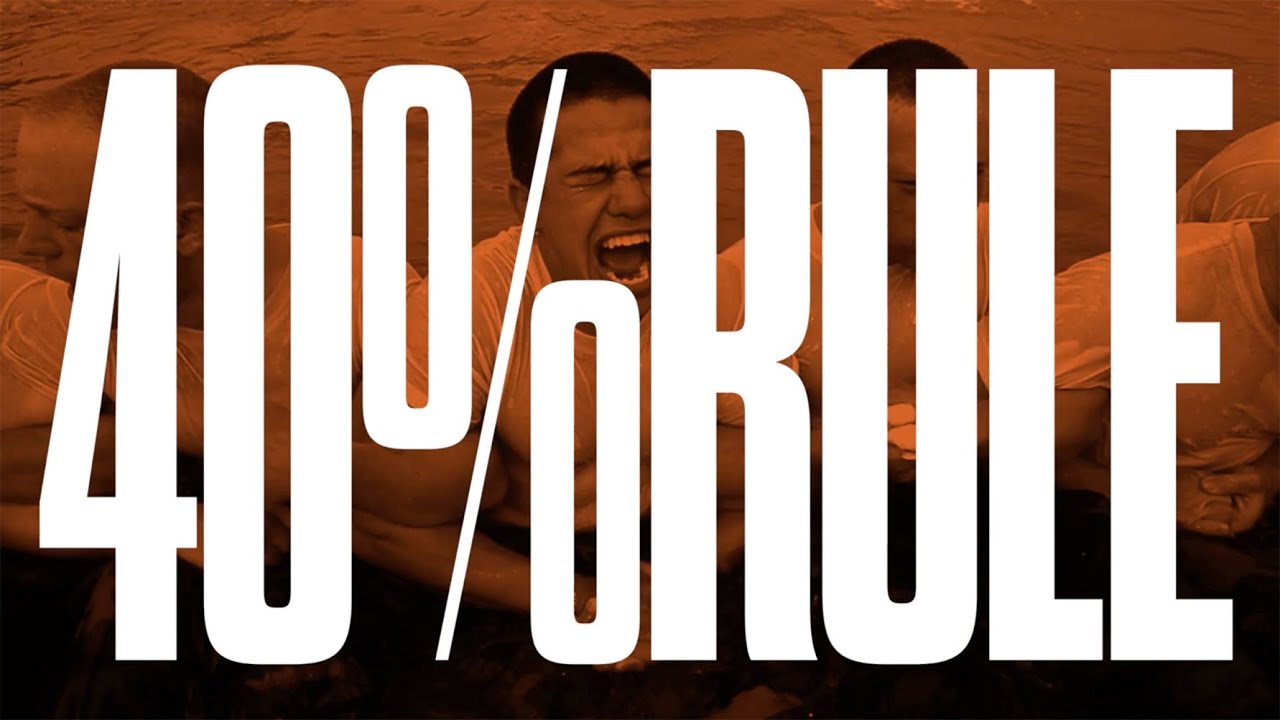 TED & Talks
Share on Facebook
Share on Twitter
Share on Pinterest
Share on LinkedIn
Navy SEAL Has a ’40 Percent Rule’ And It’s the Key to Overcoming Mental Barriers
New videos DAILY: https://bigth.ink
Join Big Think Edge for exclusive video lessons from top thinkers and doers: https://bigth.ink/Edge
—-
About 99 percent of the people who start marathons in the United States finish them. That’s an astoundingly high number considering the pain and turmoil that every marathon runner faces. What each runner has in common, says author Jesse Itzler, is that they hit a wall where their mental resources are exhausted. At this point, sheer physical will maintains their strength — and this is the will that everyone has, but we seldom know how to tap into it.

Itzler’s way to break through his own mental barriers was to invite a Navy SEAL to live with him and his family for a month. First item on the agenda? Doing over 100 pull-ups. The lesson wasn’t about physical fitness, but about mental fitness and how we each have an unused reservoir of strength and determination inside of us.
—-
TRANSCRIPT

Jesse Itzler: I first met “SEAL” at a 100-mile run in San Diego and I was running this race as part of a six-person relay team with friends and he was running the entire race by himself. And the run was unsupported so you have to bring your own supplies. So we had, you know, we overdid it a little bit. We had a tent and we had masseuses and food. I mean we were ready for, like, in case we had to stay there a week. And he had a folding chair, a bottle of water and a bag of crackers. And I just thought to myself like, “Who is this guy?” I’ve never seen anything like it. And during the race, I kept an eye on him and around mile 70 — he weighed probably 260 pounds, which is quite large for an ultra runner — he had broken all the small bones in both of his feet and had kidney damage and he finished the race. So when it was done, I Googled him. He had a fascinating life story and I decided literally to cold call him. And I flew out and met with him and after sitting with him for a couple of minutes, I realized that I could learn so much from a guy like this that what makes him tick and various buckets in my life would be so much better if a little bit of what he had rubbed off on me. I asked him to come live with my family and I for a month. So at the time that I invited “SEAL” to come live with us I had an 18-month-old son. I was married, still am. Two more kids since. And I had sold a couple of businesses. I was in a great place professionally in my life, but I was also in a routine. And routines are great, but they can also be a rut. And I found that I just wasn’t getting better. I was doing the same thing every day like so many of us. Wake up; go to work; come home, you know; have dinner; repeat. And I just wanted to get off autopilot. And I thought that he would be a great way to get in good shape, but also to just mix up my routine and get better.

The first day that SEAL came to live with me he asked me to do — he said how many pull-ups can you do? And I’m not great at pull-ups. I did about eight. Just getting over the bar, eight. And he said all right. Take 30 seconds and do it again. So 30 seconds later I got up on the bar and I did six, struggling. And he said all right, one more time. We waited 30 seconds and I barely got three or four and I was done. I mean couldn’t move my arms done. And he said all right. We’re not leaving here until you do 100 more. And I thought there’s no — well we’re going to be here for quite a long time because there’s no way that I could do 100. But I ended up doing it one at a time and he showed me, proved to me right there that there was so much more, we’re all capable of so much more than we think we are. And it was just a great lesson. It was actually the first thing that we did. It was just a great lesson that we have so much more in our reserve tank than we think we do. One of the things that “SEAL” said to me and it’s in the book and one thing that people have said that really resonated with them. He would say that when your mind is telling you you’re done, you’re really only 40 percent done. And he had a motto: If it doesn’t suck we don’t do it. And that was his way of every day forcing us to get uncomfortable to figure out what our baseline was and what our comfort level was and just turning it upside-down. The 40 percent rule — maybe it’s give or take a little — but look at a marathon. Most people hit the wall in a marathon at mile anywhere from 16 to 20. And, you know, 99 percent of the people in this country that run marathons finish and they all, predominantly all of them go through this, hit the wall. So where does that extra 50 or 60 percent or whatever the number is come from? I mean it’s their brain saying, “I’m done; I don’t want to continue,” but their will saying, You know what? Let me get to the finish line. It’s just a matter of how do we apply it to not just with the once a year marathon, but to our daily lives to make it apply to a variety of things.