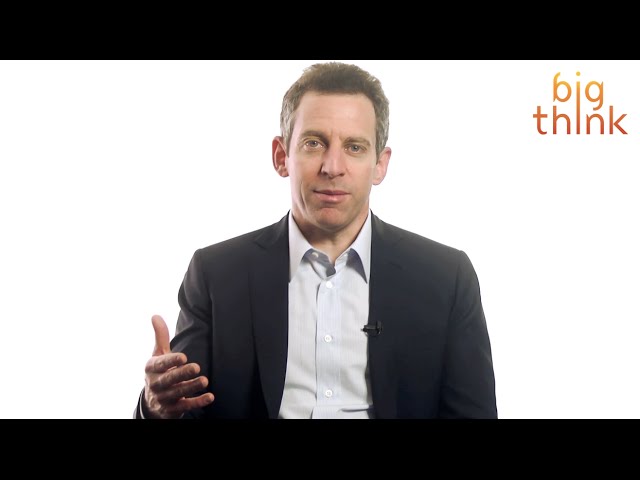 Mr. Harris’ writing has been published in over ten languages. He and his work have been discussed in Newsweek, TIME, The New York Times, Scientific American, Rolling Stone, and many other journals. His writing has appeared in Newsweek, The Los Angeles Times, The Times (London), The Boston Globe, The Atlantic, Nature, The Annals of Neurology, and elsewhere.

Mr. Harris is a graduate in philosophy from Stanford University and holds a PhD in neuroscience from UCLA, where he studied the neural basis of belief with functional magnetic resonance imaging (fMRI). He is also a Co-Founder and CEO of Project Reason.
———————————————————————————-
TRANSCRIPT:

Sam Harris: Mindfulness is very much in vogue at this moment as many of you probably know. And it’s often taught as though it were a glorified version of an executive stress ball. It’s a tool you want in your tool kit. It prepares you emotionally to go into a new experience with a positive attitude and you know you’re not hauling around baggage from the past. And that’s true. Actually having focus and having your mind in the present moment is a little bit of a superpower in situations that we’re all in from day to day. But that actually undervalues what mindfulness really is and its true potential. It’s more like the large hadron collider in that it’s a real tool for making some fundamental discoveries about the nature of the mind. And one of these discoveries is that the sense of self that we all carry around from day to day is an illusion. And cutting through that illusion I think is actually more important than stress reduction or any of the other conventional benefits that are accurately ascribed to mindfulness.

The enemy of mindfulness and really of any meditation practice is being lost in thought, is to be thinking without knowing that you’re thinking. Now the problem is not thoughts themselves. We need to think. We need to think to do almost anything that makes us human – to reason, to plan, to have social relationships, to do science. Thinking is indispensable to us but most of us spend every moment of our waking lives thinking without knowing that we’re thinking. And this automaticity is a kind of scrim thrown over at the present moment through which we view everything. And it’s distorting of our lives. It’s distorting of our emotions. It engineers our unhappiness in every moment because most of what we think is quite unpleasant. We’re judging ourselves, we’re judging others, we’re worrying about the future, we’re regretting the past, we’re at war with our experience in subtle or coarse ways. And much of this self-talk is unpleasant and diminishing our happiness in every moment. And so meditation is a tool for cutting through that.

It’s interrupting this continuous conversation we’re having with ourselves. So that is – that in and of itself is beneficial. But there are features of our experience that we don’t notice when we’re lost in thought. So, for instance, every experience you’ve ever had, every emotion, the anger you felt yesterday or a year ago isn’t here anymore. It arises and it passes away. And if it comes back in the present moment by virtue of your thinking about it again, it will subside again when you’re no longer thinking about it. Now this is something that people tend not to notice because we rather than merely feel an emotion like anger, we spend our time thinking of all the reasons why we have every right to be angry. And so the conversation keeps this emotion in play for much, much longer than its natural half-life. And if you’re able, through mindfulness to interrupt this conversation and simply witness the feeling of anger as it arises you’ll find that you can’t be angry for more than a few moments at a time. If you think you can be angry for a day or even an hour without continually manufacturing this emotion by thinking without knowing that you’re thinking, you’re mistaken. And this is something…

Read the full transcript at https://bigthink.com/videos/sam-harris-on-secular-meditation-2

Donald Trump is destroying his own presidency
Why Are Some World Records So Hard to Break?
How to be More Pirate | RSA Student Design Awards | Moving Pictures
Is the most northern part of Iceland still there?
The 24 Card Math Game #shorts